The Airbnb floating house on the Thames river in London 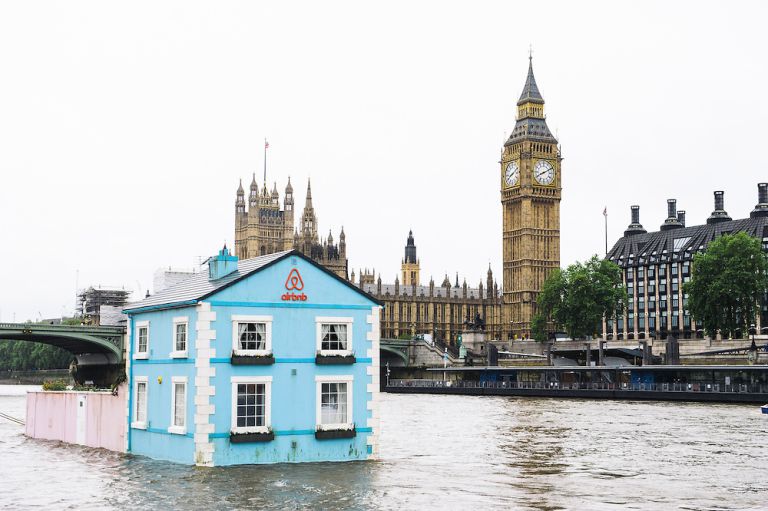 The Airbnb floating house, revealed at the Thames river in London may have been an attempt to show that the group has not lost it’s flair. This is because as a disruptor and innovator, Airbnb has come under attack from several local mob’s, including New York and Barcelona hotel mafia. Despite a significant property crash in Barcelona – mouthpieces of the hotel bosses would argue that Airbnb is pushing up house prices beyond the point of affordability.

It became clear that there are local council’s who do not serve the interest of the people, but are instead puppets for hotel corporations who fear the disruption brought by Airbnb. Barcelona / Catalunia followed New York Cities’ example of an aggressive attempt to crack down on AirBnB by issuing fines, warnings and deploying other bullying tactics in order to scare the public from using this forward thinking solution.

What Barcelona and NYC failed to disclose, is that several airports in the region has seen an increase of tourists – and that tourists now stay much longer than they used to, due to an improvement in affordability. Local businesses benefit hugely from longer stays: More cinema tickets, restaurant meals, taxi trips and other services are being sold as a result.

It would be a shame if this American innovation dies in America – yet this is entirely possible: New York City seems determined to act in an undemocratic and despotic way to crack down on one of the greatest inventions where technology has democratized and disrupted the way in which people organize their lives. Barcelona and New York is on a collision course with the people: Since AirBnB has gone viral all over the world, it would be an absolute irony to witness other cities in the world benefiting from a change in consumer behavior but these two cities falling behind.

Airbnb is also available in more than 2000 cities across the world . Palma Mallorca offers fantastic penthouse rental opportunities, Dubai offers luxury villas and in Monaco you can stay on a superyacht! The sharing economy has to fight back against tyranny – however Airbnb is still a young company and will need the support of the people to overcome the hurdles posed by big boring hotels and their puppets.

To the Mayors of Barcelona and New York city: Proof that you are democratic. How about a snap poll or test to hear what the PEOPLE in your city would like to do about Airbnb?

like
What's your reaction?
Love it!
0%
Does not excite me
0%
I would recommend it
0%
Great value for money
0%
Posted In
travel
Tags
london
london
About The Author