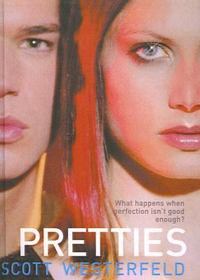 Pretties by Scott Westerfeld continues right were Uglies left off. Tally is no longer an ‘ugly.’ In fact, now she is a pretty with pretty friends and a pretty life. She spends her time planning for parties and hoping to become a part of the Crims. When she sees someone from her old life she is curious but doesn’t think much of the ugly boy that should have had his surgery already. She agrees to look for the object he hid for her but isn’t sure if she ever really will, until Zane finds out about it.

The Truth About Pretties

Now that Tally is a pretty however, she doesn’t remember anything about her ugly life. Until she and Zane find what was left for her. Now their main goal in life is to stay ‘bubbly’ so they can remember who they really are because now they realize just what being a pretty really means. It’s more than just looking good on the outside, in fact, it’s about a completely different way of thinking. Because there’s something wrong with pretty brains and that’s not right for Tally and Zane.

While Tally is escaping something goes wrong. Things are not happening the way they were supposed to and instead of ending up in the new Smoke she ends up somewhere completely different. Her world is changing from one extreme to another as she finds herself in a world that exists outside of her own. She’s still a pretty but she’s no longer with other pretties or with regular uglies from her own home. Instead, she’s with a group of people that seem to know nothing about either group and seem to know nothing about the world Tally came from. But is there something they are hiding from the rest? Maybe some of the people in Tally’s new world know a little more than they are letting on. But Pretties is a book that will keep you thinking for sure.