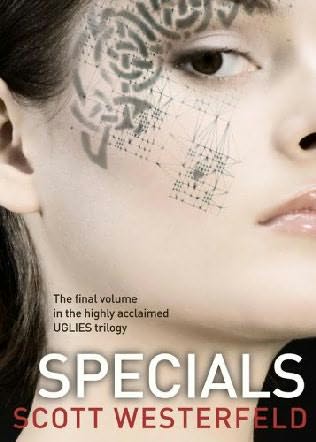 The final book in Scott Westerfeld’s series about Tally and the world of pretties and uglies is Specials. The specials are different from both pretties and uglies. In fact, they are prettier than any pretty but their minds are clearer and stronger than any ugly. They ensure that everyone is following the rules and everyone is fitting in as either a pretty or an ugly depending on where they belong, they put a stop to the Smoke and they are now interested in Tally. They want to know more about her and they want her to become one of them.

The specials decide to give Tally enhanced powers so that she and her friends are able to do even more. They are stronger and faster than pretties and most definitely smarter than uglies. She has not completely changed her way of thinking however and determines to avoid becoming like the other specials. She wants to make a change in the world and equalize the way that everyone in their world is living. But first, she wants to escape to the Smoke. It’s going to take a lot of work however to get away from the other specials.

When things start going downhill fast Tally is going to have to decide who she can trust and what she really wants to accomplish with her goals. It’s also going to be up to Tally whether or not everything goes the way it should because she’s a very important piece of the puzzle and the other specials, the Smoke and more all want to have her on their side. Unfortunately some of them are willing to do whatever it takes to ensure she doesn’t end up on someone else’s side.

This book will wrap up the story of Tally, Shay, Zane and everyone else that you’ve met along the journey. Specials are more powerful than anyone and when all is said and done, they may very well be the only ones left alive. Or perhaps, only some of the specials will make it out alive as well. Tally and her friends are definitely hoping for that outcome and there are many others looking forward to it as well. It’s going to be a bitter feud all the way to the bitter end for everyone involved and they can only hope that everything isn’t destroyed in the end. Specials will definitely keep you flipping pages.