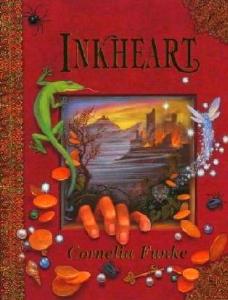 Inkheart by Cornelia Funke begins one night shortly after Meggie’s birth. At that time Meggie’s mother is transported into the world of Inkheart, the book her husband was reading. Possibly worse is that several of the terrible creatures from the book are then transported out. Meggie’s father has no idea what has happened but comes to understand that when he reads aloud these things happen. The creatures destroyed his copy of the book so they would never have to go back but that’s the only way that he is going to get his wife back, so throughout Meggie’s life he drags her from one bookstore to another, searching for another copy of Inkheart.

Meggie has never known what happened to her mother because her father always kept it a secret. She assumed, as did everyone else, that her mother simply left them. But the truth is much more difficult to understand. When Meggie gets caught up with the creatures again it’s time to come clean about the whole story. And once the story is known it’s time to face off with the creatures from Inkheart once and for all.

But they aren’t willing to go down without a fight. They want Meggie’s father’s gift and they are willing to do anything to make him use it for them. When they find out that Meggie has the same gift they are just as happy to take her as well. But they are determined to destroy their book and destroy the world as well so that they can take it over for themselves. It’s going to be more than just difficult to keep this from happening, it’s going to be almost impossible but Meggie and her friends have to try.

Meggie’s father is certain his wife has been lost to him forever but she’s actually been brought out of the book by another reader, with no voice and chained to the floor in the kitchen she is unable to communicate to her family. Will they ever find her even when they are only a few floors above? And will they even know her if they do find her? Things have changed a lot in the years since her disappearance and it’s going to take a lot of work to put those things back together. First, however, they will have to outsmart creatures who have spent over a decade planning their ultimate coup.

Harry Potter and the Goblet of Fire
Next