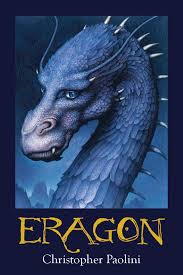 Written by Christopher Paolini, Eragon is a tale for boys and girls alike full of romance and adventure in their turn. Nothing great has ever been expected of Eragon. Left with his uncle when he was but a baby by a mother who either would not or could not care for him he has always believed that he will live and die as a farmer on the outskirts of a small town barely even noticed by the Empire. But that is all before that magical day when Eragon decides to go out hunting and instead of coming home with some meat to feed his family, he comes home with a rock that magically appeared before him. No one could ever imagine how that rock would change the course of Eragon’s life.

Trying to sell the rock amounts to nothing and, for some inexplicable reason, Eragon can’t bring himself to get rid of it. So for the next several days he keeps it in his room. Until the night he wakes up to it rolling around his floor and cracking open to reveal something he thought he would never see in his life, a dragon. Eragon, the simple farmboy, has been chosen as the Dragon Rider of one of the three remaining dragon eggs in the world, an honor that many have waited centuries for.

What’s a Farmboy Turned Dragon Rider to do?

Though Eragon has no idea what being a Dragon Rider is there are others who do and now that they know the egg has hatched they will do everything in their power to get rid of Eragon and anyone who stands in their way, before they lose everything. The battle truly begins however, when Eragon finally finds out who he is and what he will be capable of but it will take a lot of work and a lot of training from those he has never even met. Along the way he meets old friends and new enemies but he is determined to do what he can to avenge his family.

Eragon isn’t the warrior that the Varden have been waiting for all these years but he is the Dragon Rider and that means more to them than anything else. As a farmboy with a lot to prove however, Eragon is thirsty for knowledge and willing to do anything it takes to discover his true power and the power of his dragon, after all, Saphira is not one to be taken lightly. She too would like to avenge the destruction of her birth home and she will do everything she can to protect Eragon from those who wish him harm. But is the battle against the Empire too great? Or can a simple farmboy with an army truly destroy them all?