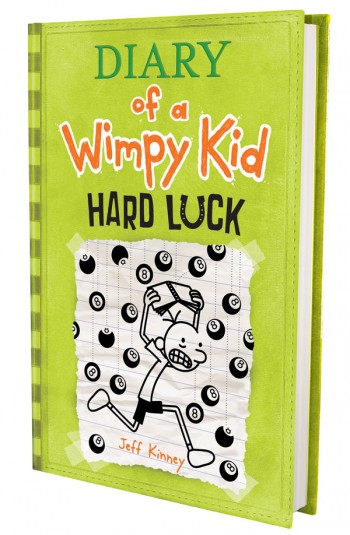 Greg Heffley is back in Jeff Kinney’s newest addition to the Diary of a Wimpy Kid series, Hard Luck. This book follows Greg as he makes his way through his rough school days yet again. Things are never easy when you’re a school aged child and when you’re Greg there are more problems than normal throughout every school year. Unfortunately this year is starting out even worse than most as Greg seems to have lost his best friend Rowley to a new girl. So what’s a boy to do when he has no friends left in the world?

Greg has decided that he’s going to use a magic 8 ball to help him make decisions for the school year. After all, the ball is supposed to be magic right? It should be able to help him decide the best course of action for the entire year and it will definitely make better decisions than he’s been making for himself. At least, that’s what Greg is hoping will happen in Diary of a Wimpy Kid: Hard Luck. But nothing is ever as easy as it seems for a wimpy kid going through another year of school.

In middle school it’s difficult to make changes and it’s difficult to decide what the best decision will be for your life. You need to somehow know more than what you’re given and you need to be willing to stand up to people. Unfortunately poor Greg isn’t willing to stand up to the bigger kids and he’s definitely not ‘in the know’ about things that are happening in a normal middle school when you don’t have any friends and the one that you used to have betrayed you. Girls shouldn’t be more important than friend’s right?

Greg wants to make some new friends but he simply can’t figure out how to do it. He also can’t figure out how to make it through the school year all by himself. After all, not having friends is definitely not a good way to avoid bullies. They seem to pray on the weak and the alone. So he’s going to have to do something fast, before his life turns into one big mess that no one is going to be able to get him out of. What’s a boy to do? The eight ball may be able to make his choices for him but is it going to make all the right choices?

The Gifts of Imperfection
Next