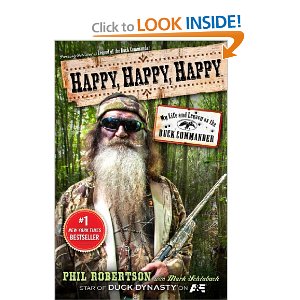 Being Happy, Happy, Happy may be the goal of just about everyone in today’s world but it’s most definitely not an easy goal to achieve. Phil Robertson however believes that he has created that world for himself and that he has achieved precisely that goal for his life. He believes that everything he has done throughout his life has led him to become the man that he always wanted to be and have a life that gives him exactly what he has always wanted and that’s exactly what this autobiography is all about.

Who is Phil Robertson?

Phil Robertson is the patriarch of the now famed family portrayed in Duck Dynasty. If you have ever seen the show then you have no doubt seen him and come to understand much of his philosophy of life. There is much more to know however, if you truly want to understand the leader of this famous family and really understand many of the things that he has to say to those who appear on his show and those who happen to come up in everyday discussion. After all his opinions may sometimes seem somewhat controversial to many.

The story of Phil is very much about his family and it is very much about his faith as well. These are the two most important things in this man’s life and he is determined that everyone know exactly how he feels about both. Without these, he believes his life could never be what he has made it into and since his life is Happy, Happy, Happy, he’s definitely not willing to sacrifice either one of those things or his happy life no matter what anyone else has to say about the way that he’s gotten there.

This is an autobiography but it is also a collection of stories from the life of a man who believes he has always been called to do the things that he has achieved in his life. He feels that God has prompted him to do what he’s done in his life and that God has also helped him to have the life that he’s wanted simply because he always followed God and encouraged his family to do so as well. It’s going to take more than anyone alive has to make Robertson change his ways or hide any of his somewhat controversial opinions. So read at your own risk, you may be shocked, but you will be informed.

Diary of a Wimpy Kid: Hard Luck
Next

Daring Greatly: How the Courage to Be Vulnerable Transforms the Way we Live, ...
Reviews
Compare
Go