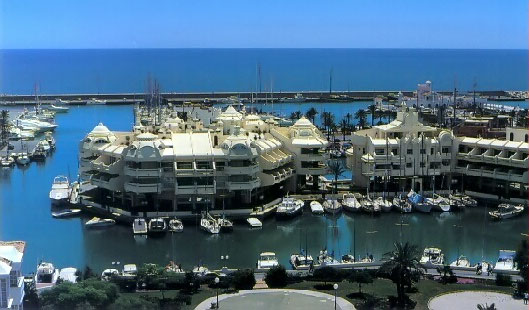 Truly beautiful with fantastic views and cheap houses. We know that illegal British homes in particular, all over Andalucia, are being demolished by over eager authorities. But the place can do with a better balance of people. For example, in Mallorca there is a German majority but in Benalmadena it is not quite the case.

Have you ever seen the movie “The business” by Frankie and Danny? It is about Marbella – and visiting Benalmadena, will make you feel like you are Frankie himself. I am going to share with you my most honest review on Benalmadena in Andalucia Spain. Upon arrival, I must say that the port itself is the most distinguishing feature. If you watch it from the sky as your plane land, you will realize that it is quite unique. Although not Fort Lauderdale or Monaco, it is truly distinguished due to the unique Indian / Arabian influence on the construction of the actual marina. If one is willing to make an effort to head up to the castle, known as “Castillo Monumento” which is located on the hill, then you can enjoy an awesome view but also observe one of the most awesome historical structures in Andalucia – it can be seen on the video above. The in-season / peak season experience and the low season will differ significantly. It does feel like a retirement village out of season, but in peak season, mainly around August, it becomes very crowded and hot, full of locals and foreigners. It did not escape the housing bubble in Spain: property prices have popped severely and there are no signs of recovery: however the are is absolutely well kept by the Spanish authorities, to the extent that other EU countries can take a lesson in local governance.

You can fly into Malaga airport (AGP) and find that it is literally just down the road – it must have been just short of 15 kilometers from the airport itself. The cool thing is that it is very well connected with the airport.

Bus routes to and from Benalmadena:

The C110 runs all the way from the central bus station by the port in Malaga to Benalmadena. In 2015 at the time of writing the first review, it costed a mere 1.65Euro for an adult single ticket. Can you believe it? I’ve never heard of such a low price for first world public transport. It is also an awesome way to learn about the locals. You can also take the train / tram service there, but that is slightly more expensive than the bus – and the views are not as awesome.

Rincón Asturiano is said to be good eat. Then there is Indian City if you are looking for something out of the ordinary. The fine dining options, including Gaucho Argentinian grill are located at Puerto Marina.

The population in Benalmadena:

It has over 70 000 residents, but during season it can increase to well over 400 000. Crime rates are significantly lower than in Marbella itself – with fewer strip clubs and red light zones, so the area is considered to be more upmarket and less seedy, although it is right next to Fuengirola. Stabbings and gun related crime is not something to be concerned of in this little town.

like
What's your reaction?
Love it!
100%
Does not excite me
0%
I would recommend it
0%
Great value for money
0%
Posted In
cities, travel
Tags
andalucia, spain
andalucia, spain
About The Author

University Of Illinois At Chicago (UIC) Review
Next