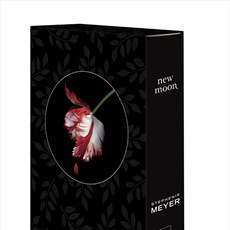 Continuing a story that she created in Twilight, Stephenie Meyer has outdone herself with the characters and storyline in New Moon. Edward and Bella’s romance is beginning to really come to fruition here. They have already faced some of the hardest trials that any couple could face and they have managed to come out on top of those situations. But of course, if their trials were over there wouldn’t be a story and there’d be no reason to keep reading these books. Lucky for us, there are plenty of reasons to keep reading.

Edward loves Bella more than anything or anyone he’s ever met and he’s determined to keep her alive, no matter what that means. So if he needs to leave her, that’s exactly what he’s going to do. In this book Bella is in more danger than ever but not necessarily because of the vampires. Instead, Bella is in danger from herself. Without Edward she’s determined that her life is simply not worth living and that she wants nothing at all but to wait for him to return. That’s not exactly what Edward had in mind but he finds it better still than the danger being in her presence can cause.

What Edward didn’t expect was how far Bella would go to get him back. How far that is, is whatever it takes. In fact, she’ll risk her own life just for the chance to hear his voice or see his face. Unfortunately she’ll also start spending time with another boy who is just as in love with her as Edward is. It’s difficult to say who she will choose or even if she will live long enough to make a choice at all, after all, she’s still risking her life to see Edward.

Even though Edward isn’t near Bella during the majority of this book he definitely is an important person because if Bella doesn’t survive her crazy stunts then he won’t want to either. The problem arises when Alice’s visions lead her to believe the worst about Bella’s desire to reach out to Edward. When she thinks Bella is gone what is Edward going to do with the information? It’s going to be a crazy time trying to save both of the wayward lovers because without each other, they simply don’t know what to do and it’s obvious to everyone outside of them that there’s no way they should be apart.