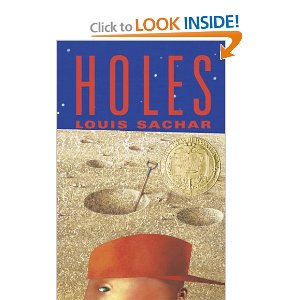 Holes, by Louis Sacher is intended as a slightly comedic representation and it succeeds on that front. It answers the question, ‘what if your entire life fell apart as a result of simply being born into an unlucky family?’ That’s exactly what’s happened to Stanley Yelnats who has always seemed to have an average life until now. It seems that the family curse is just about ready to rear its ugly head for Stanley when he finds himself in the wrong place at the wrong time with something that doesn’t belong to him. A long period of time at a camp out in the desert is his punishment and he’s going to have a hard time making it through the hard time.

Paying for the Crime

Living in the desert is going to be difficult but it’s nothing compared to what all of the boys at the camp have to do with their days. There’s a reason this book is called Holes after all. Digging holes in the desert with only one container of water per day and without the skill or stamina to dig such large holes Stanley is definitely going to have to put more than he’s ever had into simply surviving. When Stanley’s closest friend at camp runs away he knows that he’s going to have to go after him just to make sure he lives.

What Stanley doesn’t realize however is that the curse on his family was put there by a far distant relative of his new friend. In fact, a simple task will help the entire family to overcome the curse and will also help them to succeed at the tasks they’ve worked towards for years of their lives. Stanley will find something that his family lost long ago while his father will manage to succeed at his lifelong goal. But of course, first they have to survive the desert and the camp ‘counselors’ that are hot on their heels to bring them back.

There’s a reason that everyone at the camp has to dig holes. The claim may be that it’s to build character and to punish the boys for their wicked deeds. Of course that’s not the actual reason at all. The real reason is because something has been lost on the shore of what used to be a river running through the desert. The counselors are determined to find this lost treasure but they are just as determined not to do the work themselves. The boys are meant to find it but when they do, it simply won’t be the end of everything because that treasure doesn’t belong to the ones who want it.

Sense and Sensibility
Next