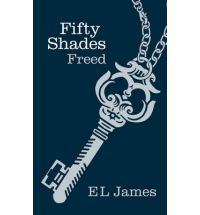 The final book in the captivating series of sex, romance and contracts, Fifty Shades Freed is possible E. L. James’ best book. This wraps up the story of Anastasia, the shy college student looking to make  a name for herself (somewhat quietly) and Christian, the big businessman with the rather intimidating (though totally sweet) family. The two may not seem like a likely couple but they most definitely work well together as readers would not doubt attest and James has very clearly expressed for herself throughout the first two and now last of the books.

It All Ends Here

In this book we will finally find out what Anastasia and Christian decide to do with the rest of their lives. Christian has agreed to try and have a real relationship with Anastasia because he finds himself, for the first time ever, actually wanting one. Anastasia has agreed to take it slowly and to put up with his lapses at times (and to open up the game room again). They are going to each make compromises and concessions to try and make their relationship work better than ever before.

In this book they will have even more obstacles that stand in their way. After all Anastasia isn’t quite so happy about Christian’s ex still being in his life. Not that there’s too much danger of that after the showdown with his mother. But there’s others from Christian’s past that could pop up at any time and there’s parts of their lives that each of them have kept secret or tried to keep in the past. When you’re in a relationship however, that becomes even more difficult and just about impossible to keep up with. Christian doesn’t always want to share his past and Anastasia isn’t always happy to let him have his secrets even if she has hers.

It will take more than just a wish and a prayer to make this relationship actually work. It’s also going to take a lot more than just two people in love because love can make people better and it can also make them worse. These two always bring out the best in each other, except when they’re bringing out the worst and because of that, this just may not be the happily ever after that everyone has been hoping for. Take some time and read it for yourself because if the critics are to be believed it will be worth your time.

The Perks of Being a Wallflower
Next