Enemies of Europe: The rise of extremism in Britain 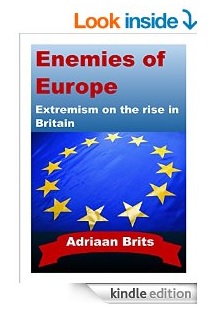 Headlines in the EU are frequented with “Britain leaving the EU”, “Extremism in Europe” and “Extremists in the UK”. However when a European airliner is shot down over Ukrainian airspace and we have sanctions against the EU from other large countries in the world, the people of Europe realize that much more is at stake. As a fair weather friend to the EU, few countries have benefited as much from the European Union as Britain did. Thousands of European students traditionally visit the UK on summer holidays and even larger numbers attend University in the UK. However since the acceleration of an ageing demographic in Europe, which is in stark contrast with GDP and population growth in the developing world, it has become clear to the UK that there is a bigger market outside of the EU. Hence some extremist elites will happily turn on the Europeans who loyally supported the UK for so many years for the sake of short term gains.

The word “Extremism” is often only used to describe those who have extreme Muslim beliefs. However other Abrahamic monotheistic religions such as Judaism and Christianity are equally extreme and based on fundamentalism. We fail to recognize it to the extent that now, the two opposing sides are about to torpedo one another, which could lead to severe social problems across Europe, but particularly in Britain.
In some cases, the word “Extremist” is also used to label anyone who simply disagrees with the status quo, but unfortunately, far right extremism which is rapidly on the rise, is not called extremism. Instead it is desperately embraced by the growing lower class in Britain who are keen to see their wages return to normal. This extremism is now promoted to them as a solution to their problem. If the polarization which is incited against fellow Europeans by Nigel Farage and David Cameron is not extreme, then what is extreme then?

The EU commissioner told British politicians in no uncertain terms that their false sense of superiority over other Europeans is not acceptable. Angela Merkel followed on by explaining that she would rather not have Britain in the EU, than an EU which treats people unfairly. For the first time, leadership in the EU is on the side of the average man on the street in Britain, who suffered as a result of the agenda of extremist elites. This publication is thought provoking. Every European, sociology and political science enthusiast should consider it’s contents.

The word “Extremism” is often only used to describe those who have extreme Muslim beliefs and in some cases, to describe those who dare question the UK’s self-proclaimed absolute right to kill large numbers of Iraqi’s, Afghans and other nationals in its quest for a geopolitical advantage. Now it is absolutely right that those who migrate to the UK with extreme Muslim beliefs should become moderates in order to promote a just and a tolerant society. Muslim extremism has to be condemned and tackled in order to solve looming social problems. However, when there are those who fled their countries for a safer life in the UK – who know that the chaos they escaped has been caused by UK interference in their countries, it does not take a religious belief to become radicalised. Even if an Iraqi was a Christian – he or she is still at risk of becoming radicalised if their fellow countrymen were exposed to UK brutality abroad. This means that weaving out these radical elements becomes much harder. To prove this challenge: The scumbag who killed the soldier Lee Rigby was even born in the UK, but claimed that he was angry at the UK’s foreign policy and the handling of situations abroad. Nothing can justify his actions – but the facts of what happened will always remain. Unless we are prepared to have empathy with the other side and acknowledge that Abrahamic monotheistic religions such as Judaism, Christianity and Islam all resulted in horrific oppression, violence and resentment, there will never be peace. There will always be one side which pretends to have the moral high ground and this does not help. Let’s not forget that when George Bush phone President Chirac to appeal to him one more time to participate the massacre of Iraqi’s, he appealed to him on the basis of their “common faith”, however his request was rejected by a moderate elitist. A Christian born-again who murders an abortion physician and a Muslim murderer are equally extreme. Both exist in the world, why do we condemn the one side so vehemently but turn a blind eye to the other or why would we downplay it?

In some cases, the word “Extremist” is also used to label anyone who simply disagrees with the status quo, but unfortunately, far right extremism which is rapidly on the rise, is not called extremism. Instead it is desperately embraced by the growing lower class in Britain who are keen to see their wages return to normal. This extremism is now promoted to them as a solution to their problem. If the polarization which is incited against fellow Europeans by Nigel Farage and David Cameron is not extreme, then what is extreme then? If the “import taxes” that are levied on products from within the EU zone such as French and Spanish wines are not extreme and unfair, then what is extreme? If propping up the Israeli government in the face of Gaza massacres but killing Gaddafi for quelling an armed uprising, and criticizing Putin for doing far less in Ukraine is not extreme and inconsistent, what is extreme then? If it is true that more than half a million Iraqi children are born dead or deformed due to depleted uranium radiation from dirty bombs, and this is not extreme, what is extreme? It is therefore contended that the majority of innocent, good hearted UK civilians face an enemy from within on two fronts: On the one hand there are Muslim extremists with a jihadi outlook on life, whose views are to take over all of Europe. On the other hand, we have far right extremists such as David Cameron and Nigel Farage, who are anti-Europe, seeks to oppress other Europeans as peasants and second class citizens – and who’s policies make migrants who are already in the UK, feel very unwelcome. Is a clash between these two extreme sides avoidable? David Cameron, along with his western allies were essentially supporting terrorism in Syria and helped to create an opportunity for British Jihadi fighters by supporting terrorist rebels in Libya and Syria –hence the irony of his ensuing policies against them: He now turns around and call them “enemies of the state”. Enemies of which state? They are simply following the UK’s example, of being enemies of the Syrian state. Surely this creates confusion. Off course he then turns around and calls the terrorists that he does support, “rebels and moderates” instead of extremists and terrorists. This is typical of the ruling elite: They are absolutely obsessed with “divide and conquer” and will create an opportunity for two sides to start fighting – and later, they will turn on the side closest to them and pretend to “distance” themselves from the entire affair so long as they can keep selling weapons to either side– or to conveniently intervene with a solution. This was done in Cyprus, Serbia, Croatia, South Africa and now in the Middle East. How long before we would recognize this as an outdated practice? Any form of extremism is dangerous. Now extremists on both sides reside inside the UK, in their masses – and they watch every move David Cameron makes. The real risk to the UK is that these two extreme sides, may eventually torpedo one another, causing nothing but misery to the majority of people who are actually moderates in every sense of the word. It is the rise of extremism – not only on one side, but on both sides, that is a grave concern to Europe and the UK.

like
What's your reaction?
Love it!
0%
Does not excite me
0%
I would recommend it
0%
Great value for money
0%
Posted In
Tags
About The Author