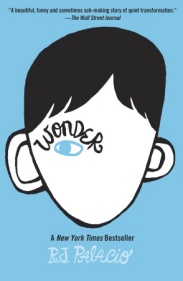 Wonder is definitely an exception story about August Pullman. R. J. Palacio has created a story of an exceptional young boy who has never been able to go to school like normal children. He’s had a deformity that kept him from being able to be around others. But things have changed now and August is forced to finally be around children his own age. Not that he’s completely normal now and not that less people are staring at him right now. He’s just starting 5th grade and though he wants to be completely normal it’s not quite as easy as all that.

August has some interesting times ahead of him as a new student who is not exactly like all the others. In fact, August has a very hard time making new friends and even more trouble getting along with all the people that he now has to associate with. It’s not going to be easy to get along anymore but his parents simply don’t have any other options. He wants to stay home again and he really wants to keep away from all those other students who just seem to be there to make fun of him.

There are a variety of different characters in this story and they are most definitely capable of amazing things. These fifth graders are stronger and they are willing to stand up for their friends. If you want to know more about Summer, August, Jack and even more then you’re definitely going to want to read more about this amazing little boy. He’s something stronger and important than even he has ever realized. He’s also far stronger than his friends and his mother have ever noticed either. Everyone is going to be able to accomplish more than they’ve ever dreamed and they’ll realize that physical appearances just aren’t as important as they may seem at first. It’s what’s inside that counts.

Jesus Calling: Enjoying Peace in His Presence
Next