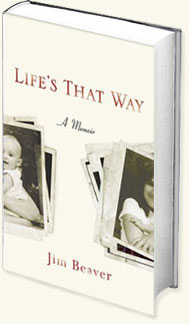 When I began reading Jim Beaver’s “Life’s That Way,” I hadn’t intended to review the book. I couldn’t picture possibly reviewing or criticizing a work that had been written under such circumstances. But upon finishing the book, it quickly became evident that I absolutely had to write a review.

“Life’s That Way” is the compilation of a series of emails Beaver wrote over the course of a year. That fact itself is unimpressive until one learns that Beaver wrote those emails to keep his friends and family informed of the developments as his wife, Cecelia, battled lung cancer and his then two year-old daughter, Maddie, underwent therapy for her recent autism diagnosis. Most emails were written between the hours of one and two a.m. and recount the day’s events, Cecilia’s struggle, and the generosity of their friends and family.

The topic itself is heartbreaking, and the course it takes in Beaver’s life even more so. I wouldn’t recommend you read the book in public, as even though I don’t cry easily, I found myself crying every four pages or so. But the book serves more purpose than just to move its audience to tears. It’s more than a memoir – it chronicles Beaver’s mentality, emotions, and transition through raw grief into the early stages of healing. Beaver presents the reader with candid examples of what is helpful to a person who is grieving, and what, truly, is not. He’s brutally honest with his thoughts and emotions, and it’s interesting to see his emotional progression through the year.

The most stunning aspect of this book is, perhaps, its honesty. “I miss her. I feel impotent and angry at this disease, this fluke, this chance mutation that has thrown a multispiked monkey wrench into a rich and lovely life. And I’m so afraid,” Beaver writes. Beaver’s writing communicates a degree of insight and self-awareness that immerses the reader into his life as it happens.

“Life’s That Way” was written in real-time, and was not intended as a memoir. At first glance, you would assume that simply compiling a year’s worth of email updates wouldn’t succeed as a memoir, but it does. Oh, it does. What’s amazing is the fact that the book has an incredibly appropriate pace. At no point will you be bored – rather, you will find yourself swept along into the events of the lives of Jim, Cecily, and Maddie. You will find yourself wanting to slow time for all of them, and the pacing and flow of this book will seem as natural as that of a finely crafted novel.

Every review is supposed to include the good and the bad, so as not to be biased. It feels almost cruel to critique this book, but if I had to change one aspect, it would only be to learn more about the friends and family that Beaver references in his entries. Friends and family play a significant role in Beaver’s life during this period, with some people taking beautiful and notable actions. A greater understanding of Beaver’s existing relationships with the people would have added more depth to these events and to their significance, but given the book’s format, such an addition would have been out of place.

At the conclusion of “Life’s That Way,” you will feel as if you have navigated the trying year right alongside Beaver. “Life’s That Way” will leave you aching, but it will also leave you more educated about the process of grief and likely better able to handle it the next time it touches your life. Such a brave, admirably honest book certainly deserves to be read.

Typo keyboard: the best thing that happened to iPhone or not?
Next

Varanasi – India’s Religious Hub or is there more to it?
Reviews
Compare
Go