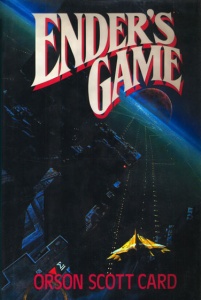 Ender’s Game, written by Orson Scott Card, shows the story of a boy torn between the right and wrong roads in his life.

The End of the World

Mankind is in danger. In fact, the world as we know it is completely different from what we’ve ever known. Not only that but an alien race has attempted to wipe us out multiple times and we’ve only barely managed to succeed at pushing them back. What are we to do next when they’re very existence threatens our survival and we could be racing towards our own destruction at any minute? We do what we always do, build a bigger and stronger weapon to fight against them. That weapon is going to be something that no one will ever expect.

The newest weapon is an army of sorts but it’s not the army that most would think of. Instead, this army is to be made up of children who are trained in a military school to make cunning soldiers. These children will infiltrate wherever needed and they will be able to succeed simply because the enemy will never suspect them. An army of children will be able to do more damage than an adult army ever could simply because no one ever expects something so small to be dangerous in any way.

Ender is one of the children chosen to join the new program and he’s willing to do anything to succeed. He’s made the cut ahead of his siblings and ahead of a great number of children. He’s even becoming one of the best students quickly and almost without effort but at the same time he’s not sure how he feels about his success or what it will mean for his future or the future of Earth. Will he be able to turn into a soldier capable of doing everything that is expected of him or is he simply too young to take on that type of responsibility?

Ender is also going to have to fight against his fellow classmates as jealousy starts to take over and rivalries develop. There’s more to Ender’s entire family than many would ever happen to see and that includes the siblings who have been passed over. But what exactly does his family have that is so important and why are all three of them essential to the world that they live in? There will be a lot of questions as Ender goes through his training and it’s uncertain what will be the outcome. Even if he succeeds in training it’s possible that Ender’s Game simply can’t save the world.