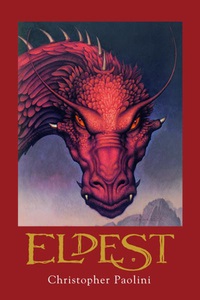 Christopher Paolini’s, Eldest, captures the story of Eragon right where it left off. Before Eragon can take his place as a warrior for the Varden he will need to prove himself against those who are impossible to fool. The elves have waited far longer than any human ever has to see the return of the Dragon Riders and they are not to be fooled by anyone. If it turns out he’s not who he says he is, or that he is not capable of doing what they want from him, they will be of no help to him and without their help, the Varden’s goal of defeating Galbatorix is all but lost.

Eragon will journey to the Varden to gain their support and their training. It will take a more than he could possibly know to succeed in the journey itself let alone trying to fight a war that he never had any idea existed before Saphira’s egg showed up in  the forest before him. With Anya at his side he should be able to reach the home of the elves unhindered but will he be welcome there? Humans have not set foot in their home in longer than any alive can remember and a human Dragon Rider is not what they hoped for.

Though his training is intended to last for quite some time it is necessary for it to be cut short so Eragon can use what he has learned in his battles toward the King. Thankfully for him, there’s a secret in the elves forest, the Eldest of them all. The rebellion is already well underway and the King has enough knowledge of it that he will not simply sit back and let it happen. Now he is attacking his own people and he is attacking the Varden to find Eragon, the last Dragon Rider, and bring him over to his side. When someone Eragon trusts and cares for betrays him it is nearly the end but he manages to still come through.

The battles are getting worse and the King is stronger than any remember him being. The fact that he also has a shade increases his power and abilities. But Eragon is getting stronger too. Once a simple farmboy he is no longer someone to be trifled with. He is a warrior and he is willing to do whatever it takes to succeed and to protect the people living under the rule of Galbatorix. It’s time for his reign to end and if that means learning to battle as he goes and learning power over everything around him, Eragon will do it as quickly as he can.

The Great Gatsby
Next