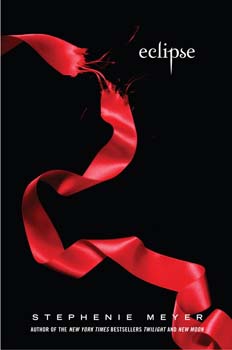 Eclipse displays the true combination of vampire and werewolf power when they decide to work together. Stephenie Meyer has definitely woven a story full of intrigue and capable of captivating every reader with its epic battle scenes. It seems that Victoria is not out of Bella’s life yet and in fact she is determined that the entire Cullen family be killed to avenge the death of the man she loved. So she’s decided to create an army that will follow her to the ends of the earth and do her bidding. But newborns have insatiable appetites and keeping her army from being noticed will take more than she expected.

Bella and Edward have a stronger relationship than in the last book and now they are looking to take the relationship to the next level when Edward proposes marriage. Though Bella is averse to it she begins to consider when Edward tells her he will not even consider turning her into a vampire unless she does. He’s determined to keep her human as long as possible and of course Jacob is determined to keep her human forever. As he tells her, he will love her until her heart stops beating.

The Battle of the Century

When Victoria decides her army is ready it’s going to take more than just the Cullen family to fight her off. For the first time ever the Quileute’s decide to help the vampires to eradicate what they determine is the bigger threat to the survival of humankind. It definitely doesn’t mean approval but it does mean a temporary truce that makes Bella sure that the war between the species may be coming to an end. Of course first they have to survive the battle against the vampires and that involves a bit of training.

Newborn vampires are the strongest they will ever be but the Cullen’s know how to fight and the Quileute’s are definitely more than capable of holding their own. It’s going to be a tough fight and it will all come down to who can protect Bella, after all, she’s the main target of Victoria’s rage and her thirst for revenge. She wants to make Edward pay for what he’s done to her and she’s determined to do that in the best way she can find, killing Bella. But no one in Forks wants Bella alive more than Edward and Jacob and they will risk their lives to keep her that way in Eclipse.

The Perks of Being a Wallflower
Reviews
Compare
Go