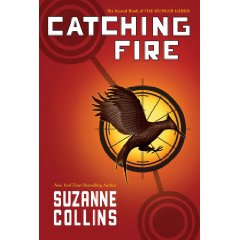 Catching Fire is the second book in Suzanne Collins acclaimed Hunter Games Trilogy and it’s definitely worth all the hype.

What You’ll Find in Catching Fire

She thought it was all over and she’d be able to return to her home with Peeta and live a normal life but first there’s the tour where they’ll both be shown off to the other districts. When she breaks protocol and speaks of Prue to her district she’s amazed by the support she receives from the complete strangers before her. Unfortunately, she’s even more shocked by the behavior of the Capitol as she leaves the stage. There’s nothing she can do as those who show her support are killed and she is forced away from the area.

Shaken but trying to move on Katniss soon discovers that everything is far from over. In fact, the Capitol has a brand new trick up its sleeve. The 75th Hunger Games are this year and it’s going to be Katniss and Peeta’s job to train the newly selected contestants for the event. But every 25 years a little twist is thrown into the games and this year it’s that old contestants are the ones going back. With only three winners in the history of her district Katniss is the only girl and she realizes right away what it means for her and what it means for Peeta as well.

This time The Games are going to be even more difficult because they are facing those who have already killed and who have already succeeded where very few others have. Katniss and Peeta are going to have to do everything they can to simply stay alive and if it gets down to the two of them well … they’ll figure that out later. They survived together once after all. But Peeta isn’t about to let Katniss die and much to her surprise, he’s not alone in his convictions.

The Capitol is not as all-powerful as it seems. There’s a rebellion brewing and it seems that Katniss and her actions towards Prue and Peeta have made her the face of that rebellion without even knowing it. With more support rallying against The Capitol than ever the rebellion isn’t about to lose her to a new round of games but can they rescue her in time and can they protect all of the people she loves? Because without her loved ones Katniss will be no help to anyone. The rebellion is definitely going to have their hands full if they think they can control Katniss Everdeen.

Harry Potter and the Sorcerer’s Stone
Next

Harry Potter and the Chamber of Secrets
Reviews
Compare
Go