iPad mini 3 review: Does Touch ID matter to you? 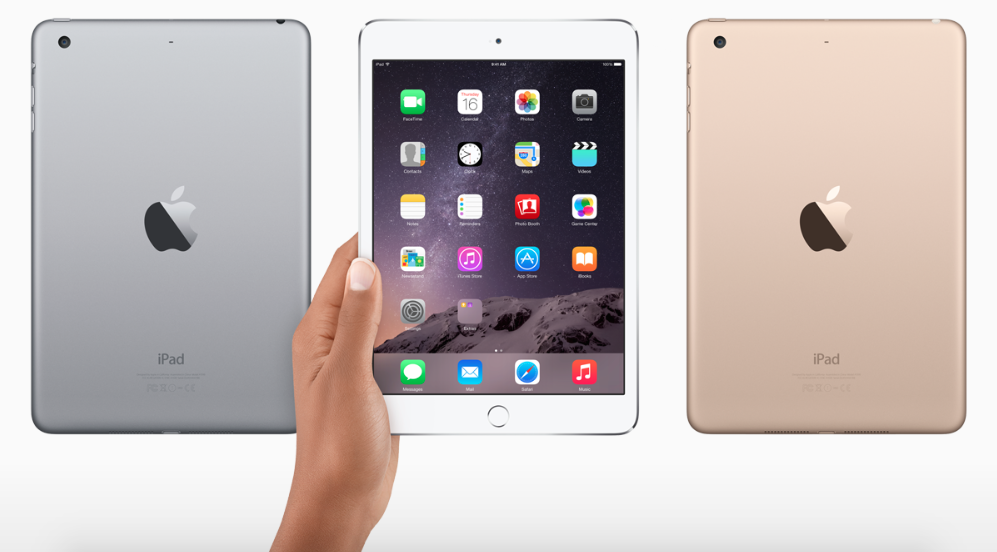 by John Marco OscilladaFebruary 12, 2015
The Touch ID is a welcome addition to the iPad mini, but other features are basically the same.
Positives:

If the Touch ID matters to you on a mini iPad, then the iPad mini 3 is a good buy. Otherwise, stick with the previous generation iPad mini with a lower price and same features.

Every latest gadget that we have seen in recent years were big on form and features. And because of that, our minds have been set to think that bigger is always better. One example is the iPad. Before the first iPad mini was launched, the 9.7-inch iPad is synonymous with the best features and performance. In the wake of smaller tablets, the iPad mini was touted by Apple as the concentration of what the original iPad had in both features and performance. In 2013, we have seen the biggest change to the iPad mini with the addition of the Retina Display. Although this was highly anticipated, many people especially the ones who were used to high-end device displays, ultimately noticed the relatively poor quality of the retina iPad mini. And now, with the third iteration of the mini, Apple decided to bring along the exact same feature set from the previous one, with only the Touch ID sensor as an addition. The big question is: does the Touch ID matter a lot for most users to justify this new iPad? Read on to know about in this iPad mini 3 review.

The newest iPad mini has the same design as it was introduced in 2012. To distinguish the latest iPad mini from the first and the second one, you have to look for the difference in its thickness. The newer iPad mini is slightly thicker than other iPad minis, being 7.5 mm thin from the previous 7.2 mm. Though the new mini has also a new metallic finish, gold, in addition to the standard silver and space grey finishes. Another thing that distinguishes the new mini from the previous two is the Touch ID sensor that basically acts as the home button as well, like on new iPhones and the Air 2. It provides a high level of security for user access and for the Apple Pay payment system which makes your sensitive financial information secure.

iPad mini has got the same 7.9-inch, 2048-by-1536-pixel Retina Display from its predecessor. Unfortunately, Apple did not do incremental improvements to the display like they did with the new iPad Air 2. The Retina display on the iPad mini 3 has a lower quality color reproduction compared to the excellent display on the bigger iPad. I do not understand why Apple had to leave the mini in the latest innovations; one reason behind this kind of abandonment is the thought of product cannibalism by which Apple fears to happen. If they have decided to bring the same set of latest features to the iPad mini as what they did to the iPad Air, these two tablets might clash with the exact same features and performance, and might outsell one or the other.

iPad mini 3 is equipped with a fast dual-core A7 system-on-a-chip with 64-bit architecture, M7 motion coprocessor, 1 GB of RAM, and the exact same battery as the previous mini. All of these power and performance, paired with the same great 10-hour battery life are the reasons why the iPad mini is preferred by many as a gaming and productivity tablet, not to mention the great portability with its small form factor.

Games are smooth, responsive, and immersive thanks to great hardware on the iPad mini 3. Photo: Apple

iOS 8 comes preinstalled on the iPad mini 3, and packs a lot of big new improvements to the overall user experience. Like the iPad Airs, the new iPad mini takes advantage of its 64-bit processor and 1 GB of RAM to give a smooth and responsive feel to the user interface. And with the hundreds of thousands of iPad-optimized apps available on the App Store, you will never run out of a great app experience. Thanks to the latest 64-bit architecture that’s onboard the iPad mini, games are more immersive with Metal. Metal is a technology in iOS games to leverage the graphics and processing power of the A7 chip. As we all know, iPads are known to have great optimizations for its apps and games. This is because Apple is a closed ecosystem, and the company has full control over its services and hardware. iPad mini is a great gaming and productivity tablet for this reason. 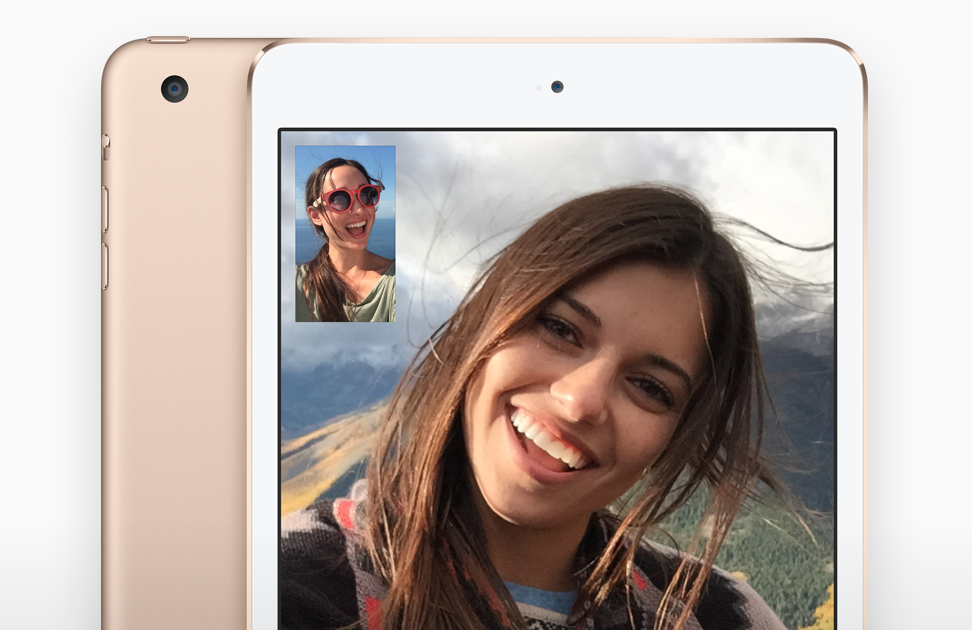 iPad mini 3 has the same great pair of cameras as its predecessor. Photo: Apple

iPad mini 3 sports the same 5-megapixel camera with the same high-quality optics as the previous iPad mini. It features a backside-illuminated CMOS sensor, f/2.4 aperture, five-element lens, a sapphire lens cover, and features autofocus and auto white balance. The back camera shoots photos with a resolutuon of 5 megapixels, and full 1080p HD video at 30 frames per second. On the front is the same 1.2-megapixel FaceTime HD camera that shoots 720p HD video and stills at a resolution of 1280-by-960 pixels. 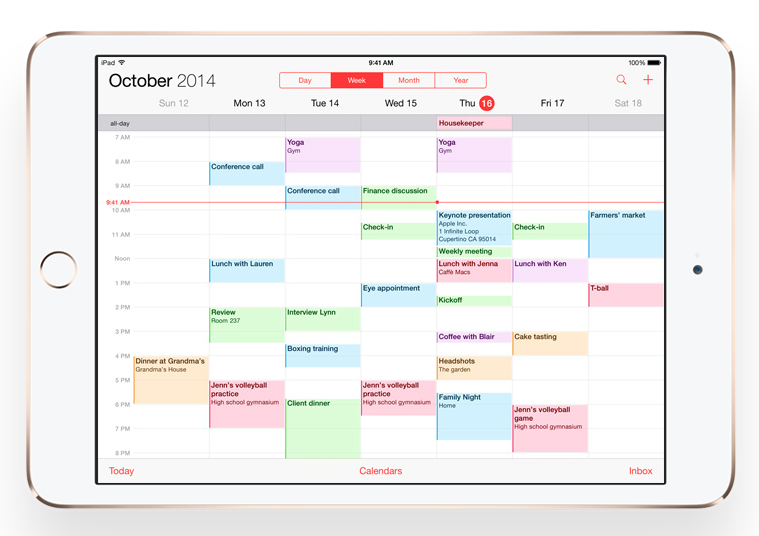 Apps are optimized to take advantage of the iPad’s canvas. Photo: Apple

The recent launch of Apple’s proprietary payment system, Apple Pay, made its way to the iPad mini 3. Users can have financial security when transacting with online purchases thanks to Apple Pay onboard the latest iPad mini. Although this iPad has Apple Pay, it can only function for online purchases, unlike the iPhone 6 and 6 Plus that feature NFC chips for contactless, cardless payments over a wide range of supported merchants in the United States. This payment feature makes use of the Touch ID sensor that authenticates the user to supply their financial information whenever needed.

iPad mini 3 comes in six configurations, in both Wi-Fi and Cellular models. The 16 GB model starts at $399, and increases by $100 for every increase in storage level. The same price model goes for the Cellular models, which start at $499. But with these prices, the new mini still has almost the same features as its predecessor, except only for the Touch ID feature and a new gold finish. It’s fair enough to say that this particular iPad is expensive for what it’s worth.

When you think of getting an ultraportable tablet, the iPad mini 3 is the best mini tablet your money can buy. It has a great set of features that make still make it one of the best tablets in the market, but you might see its downside on its old set of hardware. Although the iPad mini still performs highly satisfactorily, many tech enthusiasts are greatly disappointed by its lack of recent innovation. The high price tag is also a disadvantage, as other great tablets in the market like the new Nexus 9 can cost less than $399 while sporting a great set of features for the price. The bottom line is that, if you really want the Touch ID feature and a gold metallic finish for your iPad mini, then you should get this one. But if there’s no other reason, then you should ignore the mini 3 on the store shelves and get the iPad mini 2 instead – the mini 2 is a better buy for almost the same hardware and features with a much lower price.

How To Enjoy Valentine’s Romance Without Finance
A130
Compare
Go