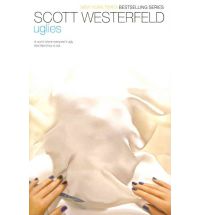 In the world created in Uglies by Scott Westerfeld no one needs to suffer being ‘ugly’ ever again. At least once they are old enough for the operation they don’t. Because when you become an adult you are able to create your own face to be beautiful and you are given operations to ensure that the look you want is yours for the rest of your life. Of course you must follow the government’s definition of beauty and every scar you’ve ever had will be gone when you wake up the morning after your birthday. You’ll also never have any worries or any problems because there is nothing for you to do once you become ‘pretty’ but party and have fun.

Tally is on the verge of her 16th birthday and like many teens she spends hours each day perfecting the image that she will take on the day she is able to undergo the operation. She’s excited beyond belief about everything that will happen to her and about the way she will get rid of all the imperfections she sees in her own body. But then Tally uncovers something sinister and strange. She meets a new friend who introduces her to the truth about the operation and begins to question everything she’s ever thought.

Is the Operation … Evil?

When Tally first discovers the truth she wonders if it’s all a lie. She’s certain that it can’t all be true and there must be some mistake. But once she comes to terms with it she is unsure what she wants to do with the information. Should she undergo the operation? Can she refuse it? The more she begins to understand the less she wants to have the operation herself and the less likely she finds it that the government will allow her to say no.

Her new friends are determined to help Tally and themselves to avoid the operation and live the lives they want but it’s going to be difficult to avoid the government themselves and of course it will be difficult to protect Tally from herself. The draw to be pretty is strong and it’s something she’s had for longer than she can remember. What’s a girl to do when all her dreams are about to come true but her mind is telling her that she shouldn’t go through with it? It’s a question Tally will have to answer and even that may not be enough to save her.

Harry Potter and the Prisoner of Azkaban
Next