The Legend of Zelda: Hyrule Historia 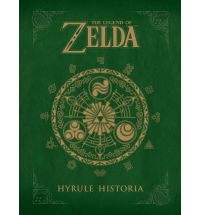 And of course these are only a few of the things that are contained within the entire book. If you’ve been interested in the series before and you’ve ever read the manga books or played the games then this is the next thing you’re going to want to try out right away so you can have a head start and a bit of a leg up on those people that simply haven’t read enough about the characters themselves.

While this book is not really going to help you beat the game any better it will give you some information that may make you a better game player. The reason for this is that each character has a different personality and they have their own thoughts and feelings and their own dreams and ambitions. By reading this book you will be able to understand and learn all of those different thoughts and feelings. This book will also explain the thought process behind the development of the entire game franchise and will have bonus information not contained anywhere else.

The Legend of Zelda: Hyrule Historia is a book full of information that has not been seen by anyone before now. It contains more imagery and more documentation than the franchise writers and creators have ever before chosen to release in a collectible and easy to read book format. This book is also created in a way that makes it a showpiece for those who wish to have a display in their home. A lovely looking book it contains the story of some of the most intriguing characters to ever be created in all of video game history, at least as far as many are concerned.