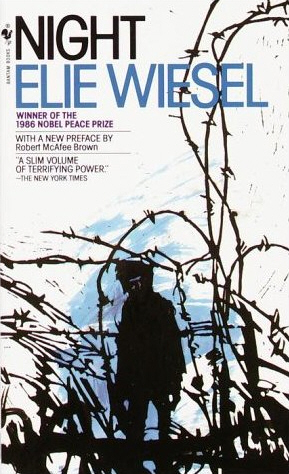 Night by Elie Wiesel is the tale of a Jewish teenager living in Hungary. Eliezer is studying the Torah until his teacher is taken away by the Gestapo. As Jewish restrictions are passed over and over things begin to change. When Eliezer and his family are deported themselves they are sent to Birkenau. Unknown to them Birkenau is the gateway to being sent to the death camp, Auschwitz. The men are separated from the women of the family and are never to see each other again. He sees the burning of babies at the camp before he is stripped and shaved.

Eliezer goes through selection as well as going through the cruel treatment of fellow prisoners within the camp. He even witnesses hangings and torture of other prisoners and those who fight against the Nazi’s as well. He sees the prisoners begin to fight amongst each other and even amongst their own families. He watches sons turn against fathers and brothers against brothers. The months in camp take a toll on him and they take a toll on the other prisoners within the camp and within the next camp they travel to as well.

The death march fifty miles from Birkenau to Gleiwitz causes a loss of many lives. It nearly causes the death of Eliezer himself though he somehow manages to survive. Next he and his father are taken through the camp and onto a cattle car bound for Buchenwald. Still their trials are not over and the two suffer much more before they will be able to have even a hope of returning to their homes and their lives before the Nazi’s took them over. It’s definitely going to be a difficult time of life for both and they may not be able to survive it.

A tale of the horrors of being a Nazi prisoner in the concentration camps during the war this is not an autobiography but it very well could be. Eliezer’s story is one that many Jewish children truly lived through. His is a tale of strength and bravery in the face of death and danger and almost certain failure. Yet he manages to continue surviving and continue caring for his father. Through the loss of his mother and sister and the loss of those he comes to know in the camp, Eliezer’s story is one of tragedy and yet one of strength.

Rush Revere and The Brave Pilgrims: Time Travel Adventures with Exceptional A...
Next

The One and Only Ivan
Reviews
Compare
Go