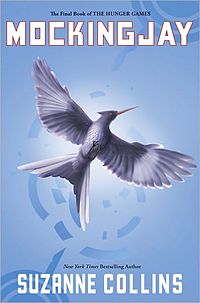 In Mockingjay, by Suzanne Collins, Katniss Everdeen truly is the ‘girl on fire’ now. In fact, she’s the face of the first rebellion against The Capitol in over 75 years. But Katniss refuses to be just the face of anything, she’s determined to stand alongside the rest of her team and fight harder than anyone for the freedom of the people in her world. But that’s not going to be as easy as one might think. In fact, defeating The Capitol is going to take a lot of bravery and a lot of skill as well because they’re not just the group of airheads that most people think.

The team has finally managed to capture Peeta back from The Capitol and at first everyone is thrilled but then they realize something has happened to him. He’s not the same lovesick boy who was taken, in fact, now he’s determined that Katniss is the cause of all his problems and he’s determined to kill her for it. It will take everything that Katniss and the rest of the rebellion have to bring him back from this if it’s even possible at all. After all, how can they trust him when all he wants is to kill the one person who may be able to save them all?

Now is the time for the rebellion to truly take effect however. It’s time to stop hiding in the shadows and actually get out there and do something. The rebellion is as large as it’s going to get and the districts that support it are at their strongest now. It’s time to go to The Capitol and fight for their rights and their beliefs before it gets to be too late because The Capitol is willing to come looking for them too just to protect the status quo as it’s always been.

The biggest question is whether or not the rebellion has any hope of success because even the best laid plans can easily go astray and when there are traitors in the midst it’s even more possible. Peeta isn’t the biggest enemy currently within the rebellion and he’s not the one that’s going to put the entire operation in danger. But is Katniss strong enough to lead a group of rebels all the way from district 13 to The Capitol and then fight their way through the streets? It will take strength and it will cost some people absolutely everything they have for only a sliver of hope of success in Mockingjay.

Harry Potter and the Chamber of Secrets
Next