The House of Hades 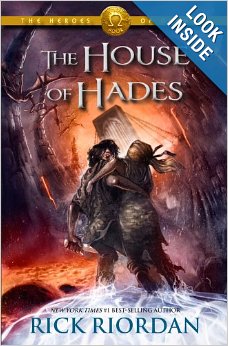 The House of Hades is the fourth book of the series by Rick Riordan. This is a story of fantasy and of the mythological creatures well known to Greek and Roman mythology. Hades is the king of the underworld and in this book he’s definitely seeking something more than the power he already has, though of course, isn’t he always? The demigods are going to have to put aside the feelings and emotions they have in order to achieve more than they have even before and being children is not going to be an excuse.

Percy and his friends are going into the underworld to save the world yet again. It’s going to be up to them to seal the door of death and keep the giants from raising the mother of all the gods. After all, it’s going to cause a lot of trouble and a lot of damage to the gods and the human race if they can’t succeed at their task but Percy and the others are definitely not strangers to that type of risk. It’s something they’ve explored many times before and the pressure is going to be on more than ever in this book.

It’s only going to be one more month before they lose once and for all unless they can defeat the giants and their terrible plan before that happens. Percy has very little time and while the others are still grieving over the loss of old friends it’s going to be difficult to have the battle of the century, yet again, and not lose any more people that are close to them. But is any battle ever completely safe? Will they be able to make it out alive with all of their friends and family intact?

Remember of course that Percy and his friends are not only demigods. They are not all-powerful and they are not even adults yet. In fact, most of them are young teens and have only recently found out that they even are demigods or that there’s any such thing as a demigod. Being related to full-fledged gods will not save them now and in fact it’s the one thing that’s put them in danger and put them in the position to have to stop the crazy events that are happening in their world. After all, the mortals don’t even know any of these things are happening. But in The House of Hades, the children are going to have to face the worst.

Lean In: Women, Work and the Will to Lead
Next

A Song of Ice and Fire
Reviews
Compare
Go