Lean In: Women, Work and the Will to Lead 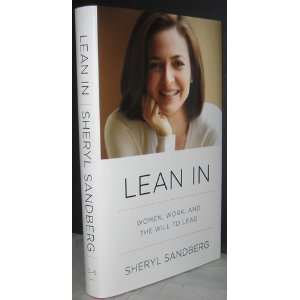 If you’re a woman living in the 21st century then you’re probably wondering just why so many women are having difficulty getting ahead and that’s exactly what Lean in: Women, Work and the Will to Lead by Sheryl Sandberg is all about. Sandberg is looking to explore the reasons that women have finally made their way into modern society with their enrollment in colleges and their presence in the business world yet have not made the jump into the power positions of our nation’s biggest companies. For some reason, women seem to have stopped before reaching the top.

A Will to Succeed

For the longest time any type of achievement for women was highly difficult and nearly impossible. Women found it difficult to get into college and even more difficult to stay in. Now, as Lean in: Women, Work and the Will to Lead explores, women have stopped really trying or at least they seem to have. The information contained within this book will explore what has caused this slowdown and the appeared stopping of women’s advancement and what could possibly be done to change it. After all, women didn’t come this far just to quit.

The author of this book is one of the very few women that’s actually in charge in our modern society. She helps to run one of the biggest corporations today, Facebook. This makes her not only a female on top, but an expert on the subject of getting there and the information about just how she did is all contained in her book so that more women can follow her example and start making a difference in the world that they live in. It’s not just a men’s world anymore and it most definitely shouldn’t be.

In this book you’ll see the choices and thoughts of a real woman as she made her way to the top so that any woman can manage their own life the way that they want it. You’re not going to have to fight forever and with this book you won’t even need to fight as long as you may think. It’s all about knowing the right steps to take and being willing to take them in pursuit of your own goals and your own future. Being a woman doesn’t mean that you have to settle for less than the best and that’s exactly what Sandberg is trying to tell us.