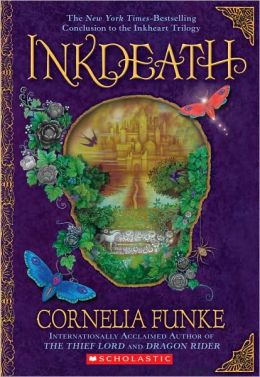 The conclusion  is looming in Inkdeath by Cornelia Funke. The Inkheart trilogy ends with this book which is filled with more than just magic, books, mythical creatures and the power of reading. It is filled also with murder, mystery, suspense and mayhem. Much is happening throughout this tale and much will continue to happen as the characters attempt to find their way through the maze of problems that keep appearing in their lap and try to fight their way back to their own homes and the lives that they love most.

Meggie and her father Mo once saved their world from destruction by Capricorn and then again they saved the world from his apprentice. Now they will have to save a new world from a new enemy. Adderhead is in control of the world of Inkheart and he’s casting his bloody and terrifying spell over everything. He will not rest until he has gained control of everything in his path and he most definitely will not stop until he has committed more atrocities than anyone has a right to commit in the name of destruction and chaos.

The author of the books no longer has control over them and Meggie’s family may just be the only people in the world with the power to stop what is happening in this fairy-tale world. If they can’t manage to bring the characters around to tell the story the right way, it just may be the end of Inkheart for good. And it just may be the end of some of their favorite characters as well. After all, Dustfinger and Farid are in the story now and Dustfinger has died there. What’s to be done about that is up to Meggie and Mo as well.

Being trapped in the pages of the book, Meggie and Mo must work hard to rewrite the story as the evil characters within rewrite it for themselves. It will make a huge difference who’s story is the better one because only one can truly become the final version of the story. Only one will be able to succeed where the other fails. No two stories can occur at the same time and for the right outcome to occur, Mo is going to have to work very hard to overcome his insecurity about his gift and fight for the right side no matter who he must make deals with.