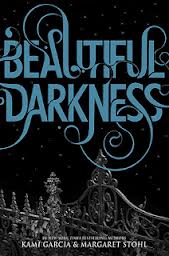 Beautiful Darkness by Kami Garcia and Maragaret Stohl is the second book in the series of the interesting Lena Duchannes. Everyone thought that Lena has gotten away with not choosing a side on her birthday last year but she always knew that wasn’t the case. All Lena did was buy herself a little time. Now she’s half and half but this year on her birthday she will have to make a choice and when she makes her choice it will kill part of the family that she adores. In fact, it will kill everyone in her family that is not part of the side that she chooses.

As of yet no oe else knows of the important choice Lena still has to make and few know the terrible consequences of the choice itself. They are happy to be ignorant of the facts and Lena is happy to keep them that way. But some strange things are once again happening in Gatlin County and the people nearby have not yet forgotten their hatred for Lena and their distrust of her family. It has continued to grow worse over time until she’s not sure what she’s going to do.

Still, Ethan refuses to forsake her and continues to stand by her side, ready to support her decision no matter what she does. It’s time for the return of some of the evil people and creatures that tried to sway Lena the last time she was supposed to make a choice but the good people are there to support her as well. There’s no doubt something is going to happen this year in Beautiful Darkness but not even Lena is sure what, precisely, that is going to be.

Running away from your problems is never the solution, after all, Ridley taught us that running doesn’t make the problems go away, they will still catch up to you. Lena is determined to stand firm and tall and make her decision steadily. Of course that’s after she decides what that decision is going to be since she’s still determined to save everyone that she loves. So what’s a girl to do when either decision she makes will cause the death of someone she loves? She’ll just have to come up with another decision that will do what she wants. It’s what she did last year after all, but will it work again? Only time will tell.

Harry Potter and the Prisoner of Azkaban
Reviews
Compare
Go