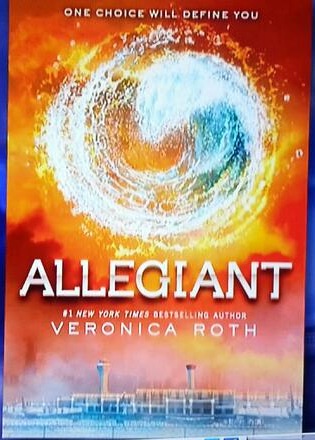 Great for a bit of reflection

Some parts are longwinded

Allegiant by Veronica Roth was the finale to the Divergent trilogy. With an amazing cast of characters scattered throughout this was a long-awaited finish. One choice will change the entire lives of everyone that lives in Tris’ world of different factions and world. It is going to take more than possibly anyone could have imagined to turn what once appeared to be a utopian world into an actual peaceful home. For those who live there it has long been thought of as an ideal world where each person has their place in the world and yet, for others, it was believed to be far worse than could be imagined.

What it Means to Win

For Tris the world that she lives in was never easy. Still it was something that would lead to calm, quiet and less controversial. And yet that calm and quiet was definitely not what she could have accepted and it was even less something that would truly have existed for long. When Tris made the decision to stop following what others wanted in her life she gave up, once and for all, simply living a quiet and calm life. Instead, Tris became something much more.

The world is beginning to fall apart. Those who fit into one faction or another are convinced that their faction is the best one and that they should be in control. On the other hand other factions are beginning to mistrust one another and are becoming more and more determined that each is doing things for their own gain. But Tris has uncovered the true plot and it seems she will do anything she can to stop the destruction that seems to be hoped for by several of the factions. Fortunately she has some help with that plan.

Surviving the ultimate showdown is going to take more than what Tris even knows. It’s going to take sacrifice and it’s going to take a lot of hard work and determination. In order to make it even to that final showdown it will require someone or many someone’s to make sacrifices and work harder than they have ever done before. The battle will last a long time and the war may leave an aftermath that’s even more difficult to overcome. Who will ever know what is to become of the world when the final war has ended and none will know who may survive.

Enemies of Europe: The rise of extremism in Britain
Reviews
Compare
Go