Birdman – A Portrait of the Artist as a Young Superhero 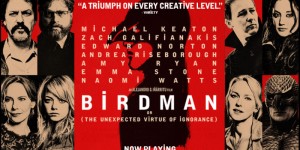 Can play the ‘art vs entertainment’ card a little too hard at times.

This is an ambitious and immersive film, designed to draw you into a world where obsession and art are one and the same – who knew hanging out with a washed up superhero could be so much fun?

If you have any interest in mainstream movies, you have probably heard the word ‘birdman’ being thrown around at a curious frequency, over the last two or three months. You might have found yourself asking, ‘Who’s Birdman, and why won’t everybody stop talking about him?’

Well, I think it is time for you to meet him.

Birdman was released to huge critical acclaim way back in October, in the United States. It wasn’t released until December 2014 in Britain, but reactions have been much the same. The cries of ‘masterpiece’ and ‘instant classic’ have come thick and fast for this blockbuster, and it deserves them wholeheartedly. It is a rare thing, Birdman – a blockbuster film that is as intelligent as it is beautiful, as beguiling as it is entertaining.

It isn’t for everyone, but it doesn’t feel like it’s deliberately trying to alienate or outsmart anybody either – approach with an open mind, and you will be duly rewarded.

The main narrative is as simple as they come. You have a middle aged actor, Riggan Thomson (played by Michael Keaton), who is trying to restart his career after a successful stint as a movie superhero. This is the eponymous ‘Birdman’ of the piece, and despite being an abandoned fictional character, his presence within the movie is paramount. For Riggan, he is both an irresistible attraction and a constant annoyance, a reminder that he made his name by ‘selling out.’

In order to escape Birdman and become a truly great actor, Riggan decides to write, direct and star in a Raymond Carver play on Broadway. He is convinced that it will be the greatest achievement of his career, so he sinks all of his money into the venture, much to the chagrin of his long suffering friend and lawyer Jake (Zach Galifianakis). After a mysterious accident puts his lead actor in the hospital, Riggan is forced to hire the boyfriend of his lead actress, Lesley (Naomi Watts).

It soon becomes clear that new guy Mike (Edward Norton) is a brilliant, but volatile actor, with little respect for women and too much love for the bottle. As the play starts its Broadway run, Riggan and Mike repeatedly clash, with both actors desperately striving for transcendence from the conventions of celebrity. Whilst method actor Mike ‘must have truth, or nothing,’ Riggan struggles to come to terms with the fact that fame isn’t happening on his own terms.

The central performances in Birdman are surely career bests. As Riggan, Keaton manages to be both intensely vulnerable and curiously loathsome, a man so obsessed with self-fulfilment that he equates hiring his own daughter as his assistant to actually spending time her. The role of maligned wild child goes to Emma Stone, who is a revelation in this film. She enters as a broken girl child, all sass and bad attitude, but by the end of the movie you’re positively screaming at the screen, begging them to listen to her sage advice.

But then, that is one of the underlying themes of Birdman – the stubbornness of the old, and their incessant fear of change. As Sam, Stone represents the YouTube generation, the kids who have never heard of Raymond Carver, but worship at the altar of overnight internet stars like Zoella and PewDiePie. She is the voice of reason here, but the vanity of actors will prevail, and her efforts to make her father see that he’s killing himself for acclaim on a dying platform ultimately fall on deaf ears.

It is almost impossible to give you a full overview of the film, and what makes it so special, without running into major spoilers. Needless to say, there is a lot more going on beneath the surface here, and it requires you to question what is real and what is not. There are supernatural elements at work here, which all tie in with the ever looming presence of the Birdman character, but are they quite what they seem? It is left up to the audience to decide, using the subtle clues and elegant hints left like breadcrumbs all over this intriguing movie.

There is one more thing to know about Birdman, one more reason why the critics have been lining up to praise this film. It is ground-breaking in the sense that the entire movie (except for one or two shots at the beginning and end) is filmed to look like one long shot. This means that there are no breaks whatsoever – scenes flow seamlessly into one another like water, characters move in and out of frame like dancers, and day turns into night without looking away.

The technical and performance related skill needed to make this happen must have been immense, and the effect that it creates is one of intensity and obsession. It draws you right in to the day to day lives of this band of misfits, monsters and pseudo-geniuses, and it teaches you just how odd a profession acting must be. It also serves to create a strange and dream-like atmosphere, which folds perfectly into the seemingly supernatural skills of our anti-hero, Riggan.

Whilst there are moments when Birdman does seem to hammer the ‘art vs entertainment’ moral a little hard – some of the scenes between Riggan and Sam, though perfectly acted, can feel heavy handed – it ironically manages to both provoke and entertain. In Riggan, director Alejandro González Iñárritu has created a searing portrait of the modern celebrity. Here is a man who had the world, but gave it up because it wasn’t enough.

The film ends on a slightly lacklustre note, with what feels like an attempt to draw all of the threads of the movie into a single grand statement. It is not a loud or ostentatious ending, just an oddly flat one, in that way that truly great movies can be plagued by sometimes. You watch a film that feels so profound that you find yourself wondering how it could ever end satisfyingly, and then you realise – it probably can’t. Yet, this is not to say that the ending of Birdman is terrible, just that the rest of the movie is so wonderful that it always going to struggle to find a fulfilling close.

iPod touch (5th generation) review: The best iPod touch ever made
Next

The Yellow Hostel, Rome – A Haven For Solo Travelers
A139
Compare
Go