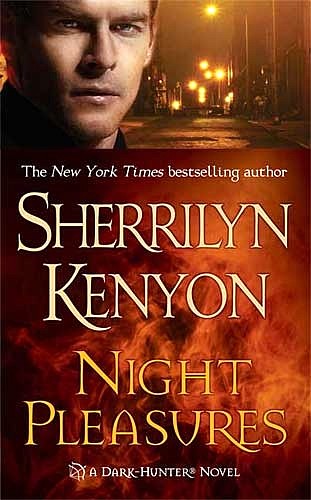 As the first book introducing the Dark Hunters, it was awesome! There was plenty of action to get any reader excited. Sexual energy and tension ran high for Amanda and Kyrian. There were wit and charm in this book that makes me want to read it again.

It was a great book! I would recommend it to anyone who hasn't read it yet as well as those who want to get into the paranormal romance world. This is a great book to start any book addiction and it would be a great addition to any romance collection. The combination of sexual chemistry and an amazing paranormal world will keep you begging for the next book.

“Night Pleasures” is the second book in the Dark Hunter series written by paranormal romance author, Sherrilyn Kenyon. The book was released on September 1, 2002.

Kyrian of Thrace was a Dark Hunter, sworn in service to the Greek goddess Artemis. He was a Spartan Prince, who had fought battles side by side with Julian of Macedon. He was a legend in the battle field. Betrayed by the one he least expected, he was tortured and killed by the Romans. Vengeance made him bargain with Artemis with his soul. He gets one-act of vengeance against those who did him wrong for an eternity of servitude as a Dark Hunter. At least it had great perks and paid well. He was trained by Acheron, the Dark Hunter leader, on how to survive and fight with his new abilities. Now he roams the streets of New Orleans fighting and killing Daimons. He was the real badass no matter what the threat.

Amanda Deveraux, an accountant, didn’t believe all the paranormal junk her family keeps on spouting. She believed in logic and just wanted a normal noneventful life. Her main goal is to live like every other human, get married and have normal kids. So when she took her normal fiancée, Cliff, to meet her folks. She really wasn’t surprised when he broke off the engagement. Her pathetic attempts at a relationship. So when her sister Tabitha asked her a favor to let the dog out of her room, the least she expected was to wake up in a room handcuffed to a stranger. A very hot stranger that she felt really attracted to but had fangs! One small, harmless favor plunged her into the world that her family kept on harping. Not only that, they were both in danger. Evil forces were gathering and it is up to both of them to stop it.

Amanda and Kyrian face their enemies head-on while fighting their attraction for each other. Amanda can’t really have a future with a man, who has no soul, can she? Is she ready to give up the “normal” she had wanted for the longest time?

This book was absolutely entertaining. I loved it! It was actually this book that introduced the existence of Dark Hunters while the first book of the series just hinted at their existence. The beauty of the story was the dialogue. The verbal sparring throughout the book made it so much fun and the sarcasm made the characters more real. It had the right amount of spark in both the lead characters that tickled the imagination. There are sexy scenes to enjoy, funny dialogue and action. Also, the sexy hot guys in black and leather doesn’t hurt the overall appeal of this book. In terms of the plot, it was not boring or dragging.

The only things that deterred my enjoyment were some scenes that were a bit sketchy. There weren’t many details on the setting, but the author concentrated more on the characters and the story. It didn’t stop or detract my amusement with this book by much.

Overall, I consider this book as a jewel. I highly recommend this to those who are fond of the paranormal genre. With all the sizzle I got from this book, I would rate it at five in all areas. Not only is it worth the time, it was absolutely worth the money. This glimpse of the paranormal world in the words of Sherrilyn Kenyon didn’t disappoint. Every page that was turned was a pleasure and discovery. To those of you looking for a book to add to your reading list, give this book a shot.

No Mercy by Sherrilyn Kenyon
A137
Compare
Go