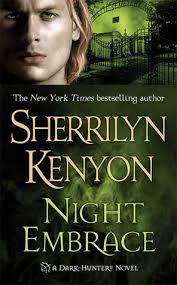 I loved it! The book offered a lot in terms of action, love, humor and fun. There was depth in terms of the different scenes going on at once. I found it refreshing, since it seemed like a puzzle. Also, there were a couple of characters that stood out and were very memorable. The story in itself was complex and action packed.

The flood of characters may not be as easily tracked by other readers. This is especially true in the pantheon of gods, since there were Celtic and Greek gods. There might be e bit of confusion as to what their powers and functions are. The multiple scenes going on at once may also not be as appealing to everyone and could be considered chaotic.

Night Embrace is the third book in the Dark Hunter series written by paranormal romance author Sherrilyn Kenyon. It was released on July 1, 2003.

Talon, a Celt Dark Hunter, preferred to be alone. He was forever cursed to cause death to those he loved and cared about; so the only solution was to get away from everyone and never let anyone get too close. He had already lost the people he cared about once; so he would rather not have a repeat performance. His heart couldn’t take it. Now he had settled in the New Orleans bayou, content with the quiet and simple life. Now his life is all about controlling his emotions and keeping the Daimons from killing the humans. He had lived in the dark and without sunshine for centuries and felt nothing but calm.

Sunshine Runningwolf, a struggling artist, found herself stalked by unknown strangers one night. Rescued by another stranger, she went on her way. When a float goes out of control and hits a man on the street, she goes out of her way to help out. She took the man with her, cared for him and in the process lost his stuff, ruined his clothes and left him to rest near an open window. The last thing she most certainly expected was to be really attracted to him. Not only that, there were secrets about her past that were coming back to her; memories of another time and of herself as another person. What could this all mean for her? Was there something deeper in her attraction to Talon?

Danger is afoot in New Orleans, there seemed to be someone out there who wanted Talon dead. Not only that, there was something more. There was someone more sinister, who would die to get back at Acheron; someone from his past, who could reveal all that he has been hiding. With all of this going on at once, will there be anyone left in New Orleans when it’s over?

This book in the series is definitely one of the coolest. It had a lot going on and I absolutely loved it. There are new characters, new revelations and more gods in this one. Despite the surge of characters, it was surprisingly presented in a way that isn’t forgettable. No minute was wasted in trying to recall the characters. There is depth to story in a sense that it was very dimensional. There were several stories going on at once, which makes it a bit more realistic. The characters in this one, both the main and the supporting characters, were very memorable. Talon and Sunshine were a really quirky couple; opposites on some areas while very similar in others. Sadly, their love story was a bit overshadowed by the action and the threat to Talon and Acheron. As for the newer characters that will become more important as the series progresses so take note!

The downside to the book is that it often intersects different pantheon of gods; it may cause confusion to those who are unfamiliar with the different gods of different races. The unfamiliarity would likely distract readers; it would be preferable if the explanation would be in the book as well. There was also a certain “rule” that the gods governed under that was never explained. It threw me off from understanding the whole story completely.

Like every other book, this one has good parts and bad parts. The good parts won me over by a landslide, but this type of book isn’t for everyone. There are lots of intersecting scenes, massive god powers and a passel of characters to remember. This makes it a more complicated; it wasn’t solely focused on the romance story of the two main characters. Although, it is still up to the other readers to decide as well; try reading it and tell us what you think.

Kiss of Midnight by Lara Adrian
Next