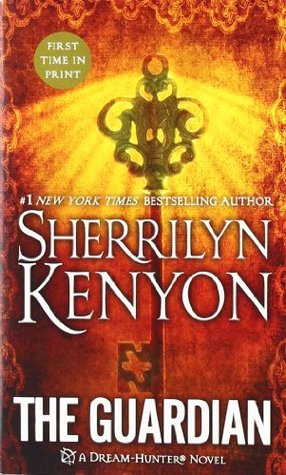 The book is intriguing and you get sucked into the story. I definitely think that the main characters are very lovable and complex. The short glimpse of their story attests to a very satisfying love story. Sherrilyn Kenyon had made me into a follower and I am hooked into the world that she is portraying.

The violence is very real, but still to a tolerable degree. There were some parts in the story that needed more detail, especially for those who haven't been following the Dark Hunter series.

The book was great. For the most part, I consider it as another wonderful book by a very talented author. This addition to the Dark Hunter series shows a lot of emotion and there are lessons at every turn. Open yourself up to a new world with this book. It would most definitely rock your paranormal reality.

“The Guardian” is another instalment of the Dark Hunter series written by paranormal romance author, Sherrilyn Kenyon. This book was released on November 1, 2011 under St. Martin’s Paperback.

Seth, a half-Egyptian demi-god had lived a life of tragedy. His own mother betrayed him and left him to die. Adopted by a different family, he was again betrayed and was sold off to one of the evil gods, Noir. Sentenced to a life of torture and misery, he had always longed for something he never had. Being a tortured guardian of Azmodea and toy of Azura, who is an evil mistress, is hardly what dreams were made of. He was given a chance to redeem himself from torture by finding the key to Olympus.  Set on his course, he kidnaps Solin, who is a dream god. It was better that he was the one torturing him; indeed he was kinder than the others who would probably stick things in all his open orifices. He at least spared him some dignity in case he dies. It had been said he knows the location of the key of Olympus. He would do just about anything to have a little reprieve from the torture. It’s not as if there is any chance of freedom so a brief respite from the pain and torture would be nice.

Lydia, a half dream god and half-jackal, would do anything for Solin, her father, even descend through hell and sure death. Her life wouldn’t mean much without her beloved father. She wasn’t weak and would be willing to fight for her mentor’s release. Captured by Seth, she is his helpless prisoner with no powers and no way out. Her thoughts often strayed to her captor, who would only wish to be called “Guardian”. Not expecting any kindness from him, she finds herself getting more involved. When Seth goes out of his way to protect her, she feels that there is more to the guardian than scary looks and frightening persona. There might be a human underneath it all. Will his kindness hold when he finds out who and what she really was?

This is a very entertaining read. A scarred warrior with an ugly and brutal past and a gentle yet powerful woman bent to save her father. Like many of Sherrilyn Kenyon’s books, there is more to it than meets the eye. There are secrets that will be revealed and a beautiful love story to remember. The plot was great and unpredictable, which I vastly commend. The characters are complex, which makes them more real.

This book is not for the faint of heart. There is torture, violence and the evil. Actually, there is a lot of evil going on in this book, but like every good story, we keep on reading to find that rainbow. There is a good balance of good and evil and living life. It amazes me that with every book there is always a lesson that stands out. In this one, I learned that no matter how uncertain life may be, it is never an excuse to quit living and fighting for who we love.

I consider this book as a great buy and worth every penny I had spent on it.  I would highly recommend this to those who are looking for equal parts action, drama and love. In it you can find some sage advice that would get you thinking about life and love. This is definitely the type of paranormal world that you can sink your teeth into and get hooked. I sure did! The search is still on for the next great book.