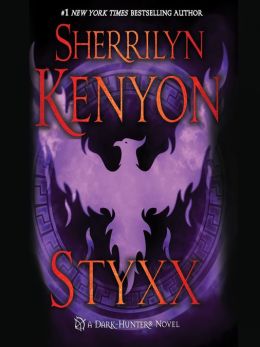 "Styxx" is the type of book that you want to read through just to find his happy ending. There were lessons in this book that not only applies in the fantasy world, but also in the real one. It featured forgiveness, compassion and a love that lasted more than eleven thousand years. Nothing can beat that!

The abuse can be a bit hard to swallow, but it balances out in the end.

It really was an amazing experience reading this book. The day I dedicated to this book was truly worth it. The bad and good made this so memorable. I would definitely recommend this book to other paranormal romance lovers out there who are still searching for the next good book to read.

“Styxx” is the 23rd book in the Dark Hunter series by paranormal romance author Sherrilyn Kenyon. It was released on September 3, 2013

Styxx is the twin brother of Acheron. They resemble each other in every way except their eyes. He hadn’t had an easy life. Everyone he knows may think that he had it all: Prince and heir, General of the Didymos Army and favored son. Yet not everything is as it seems. It is said that outer appearances can be deceiving. As the heir, he had to sacrifice his childhood; he had a sister who loathed him and a mother who hated his guts. His past isn’t even the least bit worth remembering. He could almost believe he was damned to a life of misery.

After eleven thousand years of living yet isolated, he was so sick of life. He just wanted it to be all over. He had survived being in the Vanishing Isle for countless years. Alone and miserable with only wild animals for company, he had plotted and relished the imagined death of his brother but in the end he failed. He just wanted death and to be with his wife and their son in the afterlife. Why is that so hard? Is it really too much to ask for?

So this book tells the detailed story of Styxx’s life. It left me cringing at each page turn yet unable to stop. His life wasn’t a walk in the park. It was harsh and unbelievable. It not only paints the life of Styxx but also tells his side of Acheron’s tale. Was he really the villain of Acheron’s life? Was he really deserving of the punishments that were doled out to him? Was his life truly the perfect scene that Ryssa, his sister, often painted? This book will answer all questions about who Styxx was and how he came to be the way he was. His life molded him, his uncle abused him and his father always doubted him.

The story leaves a mark in the heart and mind. It begs to question our own strengths in the face of adversity and abuse. If you look really close there are more lessons in this book presented in a way that is obvious and plain. It teaches us that there is more than one side to each story: yours, others and the truth. It also paints a picture of what it is to be human in both the worst and best ways.

I had too much tears and emotional drowning in this book. It was pretty sad and the scenes of abuse were not something I would want to remember in detail. Excessive violence is a lot more preferable than excessive abuse. This book had a lot of the latter category, which just broke my heart. The box of tissue got caught in the crossfire and had been used valiantly, but I still consider the book worth it. The fact that I got sucked into it can attest to its great story.

I give this book a five in all areas. Like the book of “Acheron”, it has lots of sad parts, but it is more than a worthwhile read. It answered a lot of the mystery that surrounded Styxx. The twists and surprises on who he really was gave me so much satisfaction that it was really an enjoyable read. The tears were worth it. To my fellow romance junkies, if you want action, drama and love that melts your heart then this is your book. This is a definite must-have for any Dark Hunter series collection. Enjoy your books!

Book Review: The Guardian by Sherrilyn Kenyon
Next

Deceptively Delicious: Parents, your veggie problem may be solved.
A137
Compare
Go