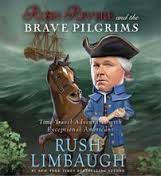 Rush Revere and The Brave Pilgrims: Time-Travel Adventures with Exceptional Americans is a historical fiction by famed talk show host Rush Limbaugh. Rusty is a big Paul Revere fan and he always has been so his friends call him Rush Revere. Of course there’s nothing better to a history buff than actually being able to explore the world and the time that you love better than any other and that’s exactly what’s going to happen to Rusty. He’s going to get a chance to go back in time and actually meet his biggest hero (and one of America’s biggest heroes as well).

In 1620 the world was definitely a very different place but that’s exactly where Rush Revere is going to take all his readers. They will be able to truly experience a crossing on the Mayflower, the ship that brought many families from England over to the newly founded colonies. The crossing however is only the beginning of what you’re going to experience in this book because once you’re back in old times. You’re going to be able to talk with real live pilgrims and find out all about them and their lives. It’s the perfect way to learn history.

If you’re interested in learning more about history then you’ll definitely be able to do so with this book. There are all different kinds of people living in the 1600’s and Rush is about to find out about all of them. He’s going to talk with them about the way they live and the way that they made it over to the new world for themselves. Learning new things can actually be fun and this teacher is going to help all of his students and all readers of these books to do just that.

For adults and children this book can actually be interesting because it tells stories in a way that intrigues audiences of all ages. You will learn all about Paul Revere but you’ll also learn all about the other important characters in the nation’s history. Everyone that was around in the years the colonies first started to really become more than just a few colonies of Great Britain. After all, there’s a lot that not many people really know but the forefathers can most definitely talk about those things and they’ll tell Rush Revere everything they can so he can pass it on to his students.

The Legend of Zelda: Hyrule Historia
Next