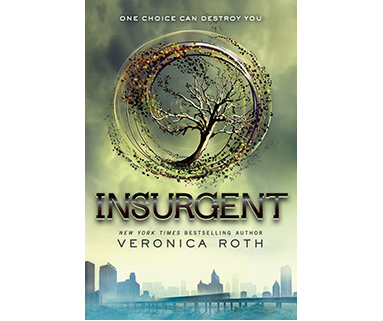 In a world where being Divergent can cost you your life, Tris Prior is about to see what she can truly do and what her powers truly are in Insurgent by Veronica Roth. The second book in the series, this is where Tris will truly be tested. She has chosen her faction against the will of her family. But at the same time she may not have disappointed them as much as she first thought and she just may not be the only divergent in the family. At least if her mother is to be believed.

Being a divergent is considered immoral and wrong. No one can have strength in more than one faction and because of that, it is important that a divergent stay quiet about the truth and try to fit in to only one faction, the faction where they most fit. For Tris, that faction is all about danger. For someone who has lived their entire life for others, never doing anything that could cause harm, being able to dress how she wants, get tattoos and even get piercings is a way to express herself and it’s a way to get what she wants for the first time ever.

Tris thought her life was going to be good until she uncovered the plot that would have destroyed her entire world. Now it’s up to her to help save the world that she lives in and the only way to do that just may be to leave it for a time before they can regroup and come back with enough forces to take down the other factions that stand in their way. But how do you fight an army of your friends and family who have been brainwashed?

The war has already begun and those on both sides of it are fighting for their lives. But not everyone in a war chooses to fight fair. And Tris and her friends may just have to fight dirty themselves in order to win. The other factions don’t know what has happened to their world and it’s not going to be Tris that they side with if they don’t somehow learn the truth about their world and everything in it. Being divergent isn’t such a terrible thing after all, it’s simply going to be a piece in the puzzle that might lead to Tris actually succeeding in the war.