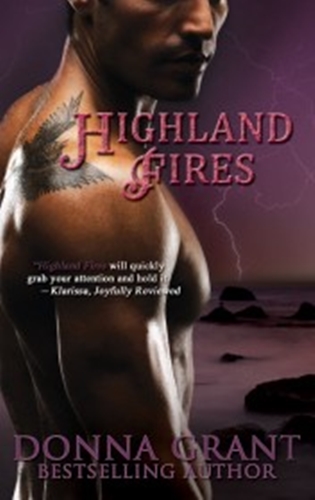 Awesome characters, a damsel-in-distress, an evil villain and a memorable love story; I couldn't ask for more from a romance novel.

The dialogue didn't really have much of a Scottish accent, even the natives. That was the only bad thing I could find.

The story was magical! It was a great book with great characters. I would definitely recommend it in any romance reader.

Highland Fires is the fourth book of the Druid’s Glen series written by Donna Grant. It was originally published on July 1, 2007 and was rereleased on March 2, 2011.

Lugus, dethroned heir and exiled prince of the Fae, was now mortal. It was a punishment to atone for his misdeeds and his quest for revenge for being punished for a crime he didn’t commit. A quest he already regretted beyond anything. At least, Earth was definitely better than the Realm of Shadows yet in his heart, nothing could compare to the Fae kingdom. For  five years he had survived, waiting for death from any of the Fae. When a Fae woman comes out from nowhere to ask for his help, he just wanted her gone. The peace and solitude of his isle was enough. He didn’t want to be dragged into her troubles or be so attracted to her.

Ahryn was in trouble. She knew Lugus was her only chance to survive. She didn’t want to be captured by a mortal and forced into marriage. It would trap her in this world with no hope of escape. The Celtic slave bracelet that she was tricked into wearing kept her magic wrapped, so much so that she was almost mortal. She had to return to the Fae realm and get the bracelet off. No matter what the cost. The magic of the Fae sustained her, without it, she would die. When the men who hunted her came back to Lugus’s isle and burned his home, they were forced to travel and find the gateway to the Fae realm; their destination was the Isle of Skye. As they embarked on their mission, she was more and more curious about Lugus. Little did she realize that he would be dangerous to her heart. Is she truly safe with him?

It was a great story. There was adventure when Ahryn and Lugus were trying to find a portal to the Fae world. The scenes were actually well described, but left some for the imagination to fill, since it was a magical world, it made it a bit more fun. It was set in Scotland as the Earth realm. Oddly enough, there are a lot of magical books that are written with Scotland as a setting. The other great thing about it is the hero. I thought that Lugus was very sexy. A haunted man, who didn’t believe he was worthy of love and forgiveness. He definitely proved himself in this book! Ahryn was also a lovely character. She wasn’t simpering, which I appreciate. Instead, she was very understanding and open-minded. She looked at who Lugus was at present and not what he had done before.

The majority of the book was spent on their journey towards the Isle of Skye to the Fae portal. They had made the journey with no powers and limited resources. It actually made the story more appealing. The way the dialogue was written didn’t seem Scottish, even from those who were Scottish humans. It seemed a little out-of-place.

Overall, I would recommend this book to all romance readers. It had a wonderful time reading this and imagining the Fae realm. The book wasn’t all about their powers since the two main characters were travelling as humans. I was surprised to learn something out of this one as well; that a man who is truly repentant can change and we need to keep an open mind. It was a good lesson to remember. This is a really good book to add on your reading list. If you already read it, tell us what you thought of the book.

Night Embrace by Sherrilyn Kenyon
Next

Dance with the Devil by Sherrilyn Kenyon
A137
Compare
Go