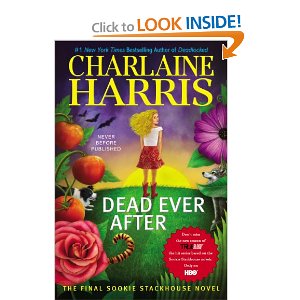 Sookie Stackhouse is back in Dead Ever After, the next book in Charlaine Harris’ amazing series. Bon Temps definitely is full of crazy events and mystical creatures that just can’t seem to leave Sookie alone. A lot is happening in her life from the return of someone who once tried to kill her to the impending marriage of the man that she loves, to someone else. But there are others in her life that have some crazy times going on as well. For one thing her best friend seems to have a little secret and maybe she has one too.

Eric has an impending marriage coming that he isn’t too thrilled about and neither is Sookie but it seems there’s nothing either one of them can do. The trick will be finding out if Sookie really wants to do anything about it after what happens between her and her best friend Sam late one night. There have always been times where everyone in Sookie’s life seems to have a different agenda but right now she isn’t even sure what her own agenda is or what it should be either.

Not only is the marriage happening and love on Sookie’s mind but there is murder in her small town as well. And the murderer may just be framing Sookie for the event. There’s going to be some strong investigations going on if anyone is going to make it out of Bon Temps alive and if Sookie is going to make it without getting arrested for murder, again, she’s going to have to find out some answers and quickly too. But what’s a girl to do when she’s already torn between the two most important men in her life?

Dead Ever After is the conclusion to the Sookie Stackhouse series and it’s one that will keep readers guessing the entire way through. It’s all about finding the truth and finding love as well. But the two may just be mutually exclusive in a town like Bon Temps where vampires run amok and even more secrets than anyone can imagine are lurking around the corners. Sookie isn’t the only one with a secret to keep because it’s not just vampires that she needs to keep quiet about anymore. Instead, she’s going to need to keep quiet about Sam and the truth about what’s happening between the two of them, at least until she figures out what to do about Eric.